Hugo is a limited character from

95,000, just like any other limited character. His first outfit, the Mountain Outfit, costs ​​

Hugo is a German-Swiss boy who has white skin, blonde hair and blue eyes. He wears a brown leather helmet with unique goggles, a sand blue T-shirt, a red puffy vest, brown shorts, turquoise socks, brown boots and a turquoise watch on his right arm.

In his Mountain Outfit, he wears a black hat with an orange flower, a white shirt with a black vest. brown shorts, white long socks and black leather shoes.

In his Pirate Outfit, Hugo wears a typical steampunk-themed pirate costume. His wooden leg is a screwdriver, he has a mechanical arm similar to that of Monkbot and Sun, a hatchet of tools on his belt, and instead of an eye patch, he has a mechanical eye. He also has a robot parrot on his arm.

Hugo with Jake and Rabbot 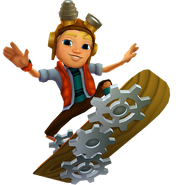 Hugo doing a trick on Clockwork

Hugo surfing on the diablo 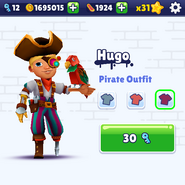 Hugo freaks out when he fixes a stopwatch

Hugo welcomes the player to

Hugo surfing on the Buddy Bear

Hugo surfing on the 9th Birthday