Hoverboard is an item in Subway Surfers that protects the player from crashing for 30 seconds. When crashed, the hoverboard will explode, cleans the area (the area where you crashed), and needs to recharge for 5 seconds before being used again. Player can activate a hoverboard by double tapping on the screen. Each hoverboard has their very own unique picture. Some hoverboards are exclusive & limited and some even have their own exclusive ability(s).

During each edition, at least 1 new hoverboard will be added to the game (except

update). Here is the list of all the current boards and their costs:

There are many kinds of hoverboards to select and some of them come with special abilities (e.g. Bouncer, Lowrider or Daredevil).

During the Beijing re-release update, Board Upgrades have been introduced. Now, even normal hoverboards have their own special powers. It is the similar to the Outfits for characters as their prices also involve Mystery Box.

The list of boards with the board upgrades are as follows:

Hoverboard from a Mystery Box 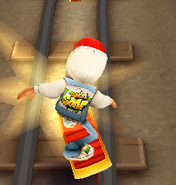 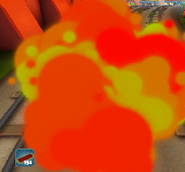 When you crash, a dark orange, red, yellow and light orange smoke comes out for a few seconds.

When Back Forward Run is activated, you can only see hoveboard when jumping 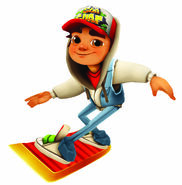 Jake surfing on a Hoverboard 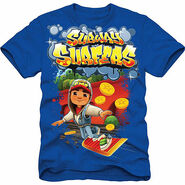 A T-shirt with Jake surfing one Hoverboard 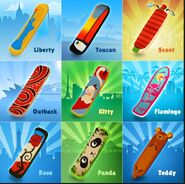 Getting hoverboards from the Weekly Hunt

Getting 40 hoverboards from a Super Mystery Box

A hoverboard activated along with 4 other Power-Ups 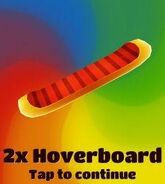 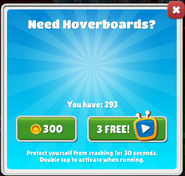 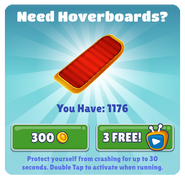