Hot Rod is a hoverboard which was first introduced in

. Its special power is to speed up, much like the Daredevil hoverboard. However, this board is not a special edition hoverboard.

Its appearance is one of the most deluxe of all the other hoverboards, with its very own engine and a flame design on the front. 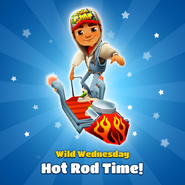 Activating Hot Rod during the event

Wayne riding on the Hot Rod

Trying out Hot Rod with Tony in his Folk Outfit

Selecting Hot Rod with Noon during the tryout

Trying it out with Noon