Gingerbot is a surfer from

. They can be unlocked by loging in 10 times.

Gingerbot is basically Boombot but as a gingerbread man. Both of their eyes are jelly beans with one being red, and the other being green. There's also the same color-coded jellybeans on the side of their hands. They wear a red little jacket and is outlined with frosting, as is the rest of their body. 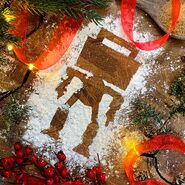