"Music savant and connoisseur of all things 80s. Fresh is highly intelligent and perceptive, but speaks mostly through his boombox music. He's a deep thinker but prone to cynicism – his songs tell it like it really is. Fresh is the glue that holds the Surfers together."

Fresh is a character in Subway Surfers. He can be unlocked by collecting 50 Fresh's Stereos (

Fresh is a boy with a very high military-style haircut, slightly dark brown skin and brown eyes. He wears thick glasses, a green tank top, orange shorts, blue, grey and red sneakers and white socks with two different colored stripes. He is also holding a radio wherever he goes.

During the Beijing,Fresh was given 2 new outfits which are the Funk Outfit and the Sport Outfit edition, they cost

in his Funk outfit, he gains purple shades and s green t-shirt with patterns on it. His radio also turns black.

in his Sport outfit, he gains a burgandy hradband, a burgundy vest which says 1 and burgandy shorts. He also carries a basketball.

Getting a Top Run with Fresh

Getting a Top Run with Fresh in his basketball outfit 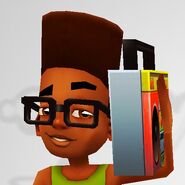 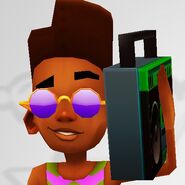 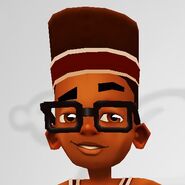