Frank wears a black suit, black shoes and a bunny mask which covers his entire face. He has some visible short chocolate brown hair behind his mask. His skin appears to be mildly tanned. Frank is equipped with a black briefcase which he carries in his left hand while running, similar to Fresh and his stereo/boombox.

Frank received a new outfit in Subway Surfers World Tour: New Orleans, the Clown Outfit, in which his mask is replaced with a clown's and he holds a red flower in his hand instead of his suitcase. His suit and shoes remain unchanged.

He also received the Tiger Outfit during the Mumbai edition. He now wears a tiger mask and his briefcase has a tiger tail sticking out of it. The rest remains the same.

Getting a Top Run with Frank

Getting a Top Run with Frank in his Clown Outfit

Getting a Top Run with Frank in his Tiger Outfit 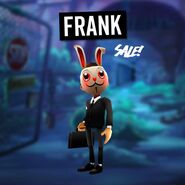 Add a photo to this gallery
Retrieved from "https://subwaysurf.fandom.com/wiki/Frank?oldid=101692"
Community content is available under CC-BY-SA unless otherwise noted.