View source
Not to be confused with Flamingo Hunt Tokens.

Flamingo is the eighth limited hoverboard in Subway Surfers. Like any other hoverboard, it protects you from crashing for 30 seconds. When crashed, it will explode and recharge for 5 seconds before it can be reused. It was released in the

edition and it was only available in this edition. Like Nick, it was re-released again at the

The hoverboard has a picture of a flamingo on a pink and blue background. It has a yellow circle that symbolizes the sun. 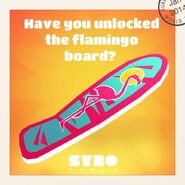 Have you unlocked the Flamingo Board?

Nick surfing on the Flamingo hoverboard

Nick in his Neon Outfit surfing on the Flamingo Board

Unlocking Flamingo with Coco in her Art Outfit

Sofia in her Tango Outfit surfing on Flamingo