These are the special events that occur in Subway Surfers.

The Weekend Fun Spraycan Award was introduced in the

The Weekend Champion Spraycan Award was introduced in the

Sales are one of the most common events in Subway Surfers. When there is a sale, a certain in-app purchase's value will be increased. It happens in both Coin and Key in-app purchases.

. Similar to the Word Hunt, the Weekly Hunt required the player to collect tokens (corresponding to the World Tour edition) to earn specific prizes (such as Score Boosters, Hoverboards, Keys, etc.).

Season Hunts is an expanded version of weekly hunts. Instead of collecting tokens for each week, players have to collect tokens for the whole tour. Each season hunt contains one limited character with at least one of their outfits and at least one limited hoverboard. There are other prizes such as coins, keys, and mystery boxes.

Birthday Comeback was an event that occured during

. It lasted for 21 days/3 weeks. Every day 3 returning characters will be offered a multiplier bonus. In

, this event came back, and there was a return of 3 characters per each year. 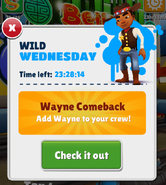 Some hoverboard have been able to be tried out for 24 hours. They include Hot Rod, Lowrider and Bouncer, and many more. For copyright and many other unknown reasons, the creators of the game removed the option of tryouts.

Prizes in the Mystery Box during the event

Prizes in the Super Mystery Box during the event

Purchasing a Mystery Box during a Mega Jackpot Event

Rather than completing missions or Daily Challenges, the player could collect Super Mystery Boxes in the game for free. Starting in

Edition, the Super Mystery Box Mania event was only every Friday. However, for unknown reasons, the event did not show up on

, but the mystery boxes still showed up.

Mystery Mondays were introduced in the

edition. This event occurs every Monday and introduces the Super Sterilizer, which transforms into a random item when collected.

After collecting the Super Mysterizer, it turns into the Miami board

A Super Mysterizer on the train

Wild Wednesdays was introduced in the

edition. This event occurs every Wednesday (hence it's name), and have currently re-introduced Mega Jackpots. During the

update, SYBO had removed the event for unknown reasons.

These Special Thursdays was introduced in the Los Angeles edition. During this event, if you are using a certain character, you automatically activate a Score Booster on your run. Also, this event will be helpful to get Top Run high scores and Gold medals. During the

edition, the event was removed. 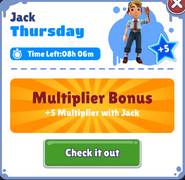 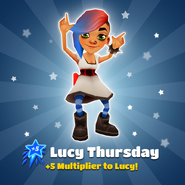 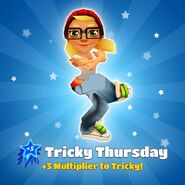 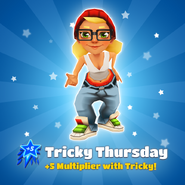 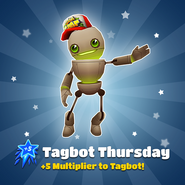 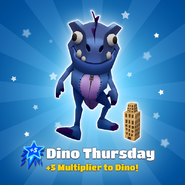 Multiplier Bonus is an event that was introduced during the

edition, and it replaces the Wild Wednesdays and Special Thursdays events. This events is on wednesdays and thursdays.

Fabulous Friday was introduced in the

edition. It was similar to Wild Wednesdays, but with the event held on Friday instead. For unknown reasons, the event did not show on 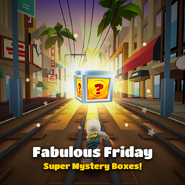 Terrific Tuesday was introduced in the

edition. It is similar to Wild Wednesdays, but with the event held on Tuesday instead. 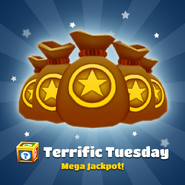