, but requires in-app purchase. She can be unlocked by purchasing with

95,000, just like all other limited characters. In Subway Surfers: Winter Holiday, she received her first outfit called the Ice Outfit, which costs

she received her second outfit called the Candy Outfit, which costs

Elf Tricky is basically Tricky except that she is dressed in an elf outfit and wearing a Santa Claus hat. She still wears her original shoes and glasses. She also wears red and white striped leggings.

In her Ice Outfit, her glasses are changed from black to pale blue. She wears a turquoise elf suit with a large buckle, a hood and blue shorts and her shirt, hat, and sneakers change to blue.

In her Candy Outfit, She wears a dress, socks, sneakers, glasses and a pink crown, red gloves, and a Christmas cane on top of her crown.

Elf Tricky is back! 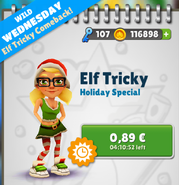 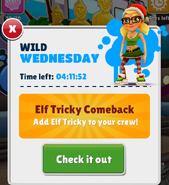 Elf Tricky on the Starboard

Getting a Top Run with Elf Tricky 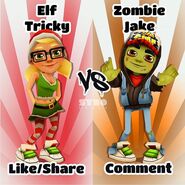 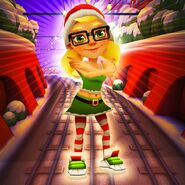 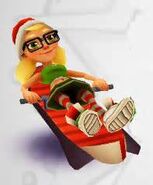 Elf Tricky with a Super Magnet and Super Sneakers.

Her, and all the others characters are playing in the Subway Surfers: Holiday subway. 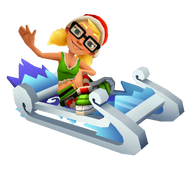 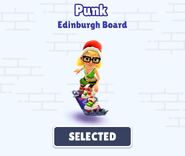 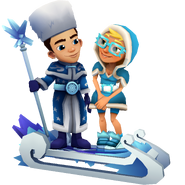 Elf Tricky in her Ice Outfit with Nicolai in his Frost Outfit on Sleigh
Español Français Português do Brasil Türkçe
Community content is available under CC-BY-SA unless otherwise noted.
Advertisement