Coins (which appear as

in the game) are the main currency in Subway Surfers. Coins can be obtained in many ways, for example, collecting them while in the subway or receiving them from mystery boxes. With enough coins, players can buy characters like King, Zoe and Prince K, or hoverboards like Panda, Hot Rod and Lowrider. However, some characters or hoverboards like Tricky, Yutani and Fresh use tokens instead of coins to be obtained. Coins are also used to upgrade and buy power-ups and skip missions.

Where to Find Coins?

How to Spend Coins?

Players can also buy coins with real money. The below table illustrates the prices of each "pack" of coins.

Getting 8.000 Coins from a Super Mystery Box

A bag of coins collected from the Mystery Box. 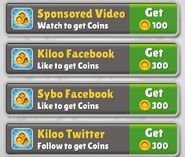 Other ways to get coins (Pg 1)

Getting coins from a Sponsored Video

Coins on the trains 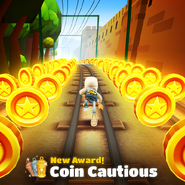 Getting free coins from the Friends menu

Earn coins after the Seoul 2015 update

The Earn Coins menu during the Mumbai update

The Earn Coins menu during the Los Angeles update 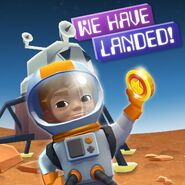