Clementine is a surfer from

. She can be unlocked by completing the season hunt.

In her default outfit she wears a brown fluffy coat with a green outline on her hood and jingle bells on her red scarf, and with red antler ears coming out of the hood along with some reindeer ears on the side. She also wears some green and red stripped long socks and underneath some long fuzzy boots. If you look closely she wears red mittens. She also has blond hair and green eyes. 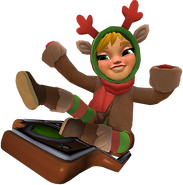