Chicky is the fourth limited hoverboard and the first token hoverboard in Subway Surfers. Originally, it could only be unlocked by collecting 100 eggs in 30 days at the Egg Hunt event during

. Like any other hoverboard, it protects your character from crashing by any obstacles for 30 seconds. When crashed, it will explode and need a few seconds to recharge in order to use it again.

It has the appearance of a rather cute chick in a full-sized view. 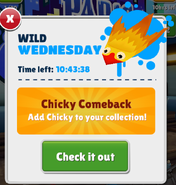 Purchasing Chicky with Tony during the event

Buy Chicky for money during a limited sale 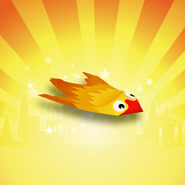 Selecting Chicky with Nikos in his Hero Outfit