Start a Wiki
Cherry is the seventh limited hoverboard in Subway Surfers and the second token board of the game. Like any other hoverboard, it protects you from crashing for 30 seconds. When crashed, the hoverboard will explode and need to recharge for a few seconds before using again. The board has a picture of a cherry blossom on a green and white striped background. It was introduced in Subway Surfers World Tour: Tokyo. In order to unlock the hoverboard, users had to collect 60

(Japanese Keychains) within a week at the final week of the Weekly Hunt.

Unlocking Cherry with Harumi in her Fury Outfit 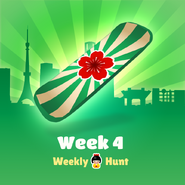 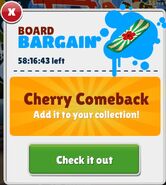 Unlocking Cherry during the Monaco hunt

Selecting Cherry with Harumi in her Fury Outfit

Unlocking Cherry during the second week of the Monaco Weekly Hunt

Unlocking Cherry during the final week of the Tokyo Weekly Hunt
Add a photo to this gallery
Retrieved from "https://subwaysurf.fandom.com/wiki/Cherry?oldid=149696"
Community content is available under CC-BY-SA unless otherwise noted.