Charlie is a limited character in

. They are non-binary and use they/them pronouns. It costs

Charlie is a light-skinned kid with blue eyes and blond hair in a spiked hairstyle. They wear a cyan t-shirt tucked into baggy beige colored trousers with two white stripes below the knees. Their shoes are blue and white high-tops with white laces. They covered most of their front with magenta spray paint after shaking the can until it exploded. 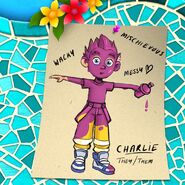 Getting a high score with Charlie
Español Français Português do Brasil Türkçe
Community content is available under CC-BY-SA unless otherwise noted.
Advertisement