Carmen is a limited character from

, and was also the 4th limited character in Subway Surfers and the 2nd in the World Tour series. She can be unlocked by purchasing with

Carmen is a young Brazilian woman. She has brown eyes along with blue eyeshadow and long black hair tied in a ponytail. Her headpiece has three red gems on it: two smaller ones on both sides of the one larger gem in the center. She also has black eyeliner. She wears a gold headpiece with blue and green feathers and a matching outfit, similar to that of those worn by samba dancer. She also wears yellow sandals.

, She wore white sneakers with a blue tongue and orange laces. Carmen's clothes, makeup and shoes were changed significantly during the update, permanently replacing her old look.

She wears a pink skirt and top. Her sandals also change to pink and have purple flowers on them. Meanwhile, Carmen wears a pink headband. On the left is a big pink blossom which hangs from the left of the headband, while in the middle and in the back of her head are a yellow and green flower, respectively. Her earrings also get removed and her hair are no longer tied up in a bun, but this time are freely out. Her makeup changes from blue to yellow and she wears two bracelets. Finally, her leggings change from green to pink.

She wears a green and yellow zipped-up jacket, a yellow skirt, green socks and blue trainers. She loses her Carnival headband and she wears a wig which is yellow and red at the tips.

Getting a Top Run with Carmen

Getting a Top Run with Carmen in her Shake Outfit

Getting a Top Run with Carmen in her Team Outfit 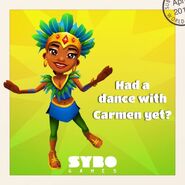 Have you danced with Carmen yet? 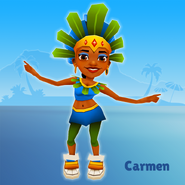 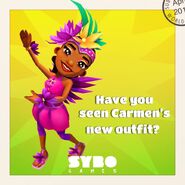 Have you seen Carmen's new outfit? 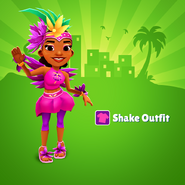 Purchasing Carmen during the event 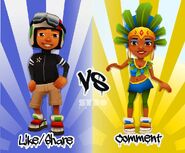 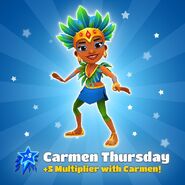 Carmen with Jake and Tricky

Carmen in her Shake Outfit on Rocket 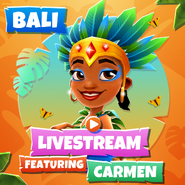 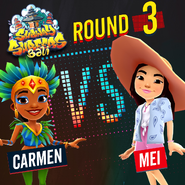 Carmen along with other female surfers

Carmen surfing on the Toucan Board

Carmen in her Shake Outfit surfing on Buddy Bear

Carmen in her Shake Outfit surfing on Uprock

Carmen in her Team Outfit surfing on Renegade

Carmen in her Team outfit surfing on Pedal

Carmen along with other surfers