Callum is a limited edition character from

. They can be unlocked with

40. Their second outfit, the Changeling Outfit, can be unlocked with

Callum, a proper Scottish Oi punk from Edinburgh, has red hair that they wear in a buzz cut. They wear a leather jacket with buttons and "SubSurf" written on the back. Underneath the jacket, they wear a black shirt with a green star on it. They also wear a blue, green and red tartan kilt, green socks, and black boots with yellow laces. Attached to the front of their kilt is a traditional Scottish pouch, called a Sporran. They have an eyebrow piercing, a septum piercing and a helix piercing. They wear a safety pin in their right ear and two earrings in the other. Callum is missing a tooth.

In their Changeling Outfit, they disguise themself as a Changeling, a character from Scottish folk tales. Their skin is turquoise. They have a fake horn on their head and false monster ears. They wear a ripped black and red shirt with a fishbone design, ripped black pants, and fake hooves. 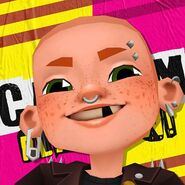 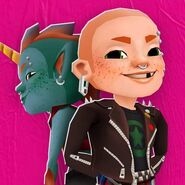 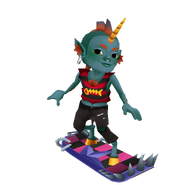 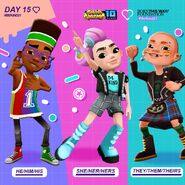 Callum with Cleo and Pride Fresh 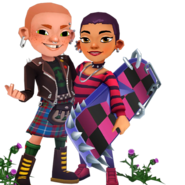 Callum, Nina and the Punk Board 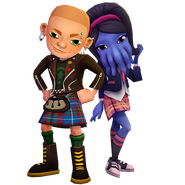