Buddy is a limited character that is exclusive to

. They were also the twenty-second limited character in Subway Surfers, and the twentieth in the World tour series. They can be purchased with

update, they make it the holiday special like Elf Tricky and gives them a new outfit, Candy Outfit which costs

Their first outfit, the Sunny Outfit, can be bought for

25. Their second outfit, the Candy Outfit, can be bought for

Buddy is a snowman with a red scarf, gloves and green striped red shoes, a hat with a green feather and a snow ball. Their hands, legs and eyes are blue.

In their second outfit, the Sunny Outfit, they are wearing dark sunglasses, an open chested red shirt, tan shorts, a beach hat, and a lei.

In their third outfit, the Candy Outfit, they are wearing a pink soldier hat and a soldier uniform made of candies, blue jeans, and red boots. Their nose is a candy cane. They also have a cookie as a belt buckle. 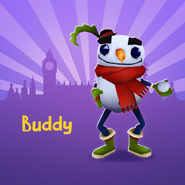 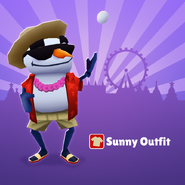 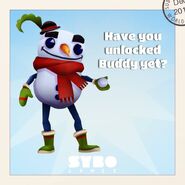 Getting a Top Run with Buddy

Getting a Top Run with Buddy in its Sunny Outfit

Getting a Top Run with Buddy in their Candy Outfit

Buddy welcomes the player to London

Buddy welcomes the player to the North Pole 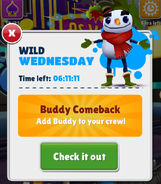 Buddy riding the Jingles board 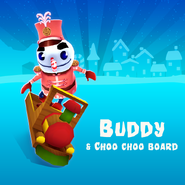