Bubblegum is the seventeenth limited hoverboard in Subway Surfers. Like any other hoverboard, it protects you from crashing for 30 seconds. When crashed, it will explode and need a few seconds to recharge. It has no special ability.

It has a pink background with the text 'POP!' written in light blue on it. On the backside, it says '!'.

Mina on the Bubblegum board

Using the Bubblegum board 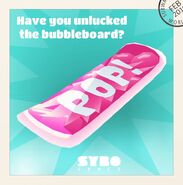 Have you unlocked the Bubblegum board?

Mina in her Pop Outfit surfing on Bubblegum 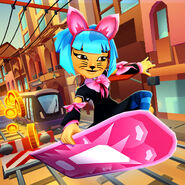 Harumi on the Bubblegum board
Español Français Português do Brasil Türkçe
Community content is available under CC-BY-SA unless otherwise noted.
Advertisement