Brody can be unlocked by purchasing with

350,000. He is the second most expensive character in Subway Surfers, topped only by Prince K. His first outfit, the Posh Outfit, can be bought for

35. His second outfit, the Chill Outfit, can be bought for

Update,  He received his Posh Outfit. In his Posh Outfit, his shirt changes to a black polo and he is now wearing his glasses and a silver ring. His shorts are also changed to brown.

Update, He received his Chill Outfit. In his Chill Outfit, he now has a large red headband with two v shaped white lines on the top of the headband, holding down his long hair. His glasses are now pink/red and are oval shaped. His necklace is now multicolored with a green peace sign likes GAU-8 hanging at the bottom. His shirt is also moderately more blue and shorts is changed to red and green.

Getting a Top Run with Brody

Getting a Top Run with Brody in his Posh Outfit

Getting a Top Run with Brody in his Chill Outfit 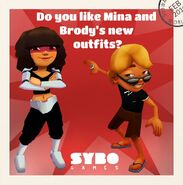 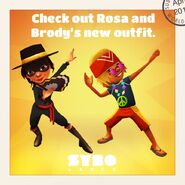 Brody surfing on the Big Kahuna

Brody surfing on the Bouncer 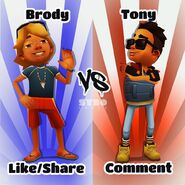 Brody, Tagbot, and Frank in Mumbai.

Brody is not selected 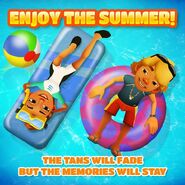 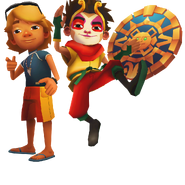 Brody and Sun with the Tumi board
Español Français Português do Brasil Türkçe
Community content is available under CC-BY-SA unless otherwise noted.
Advertisement