His Kung Fu Outfit can be purchased with 30

Brandon is a Chinese young adult with brown hair. He wears a red sleeveless shirt covered by a gold-colored jacket. He also wears black pants and white-and-red shoes.

In his Kung Fu outfit, his jacket is changed to a stylish purple jacket with a swirl pattern. The pants are the same as his original outfit. He is also barefooted and wears sunglasses with a gold frame. 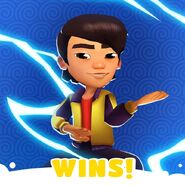 Brandon flying in the sky in

The Brandon statue on the

loading screen on the right side of the screen

Brandon in his Kung Fu Outfit surfing on Wayfarer