Start a Wiki
Boombot is the seventeenth non-limited character in Subway Surfers. It can be unlocked by purchasing anything from the store

Boombot is a golden robot with a floating boombox as its head. It also has golden eyes.

Boombot selected as a character 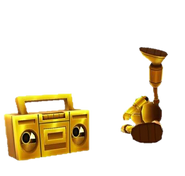 Add a photo to this gallery
Retrieved from "https://subwaysurf.fandom.com/wiki/Boombot?oldid=122885"
Community content is available under CC-BY-SA unless otherwise noted.