Bjarki is a character exclusive & limited to

95,000, just like any other limited character. His first outfit, the Power Outfit, can be bought for

30. His second outfit, the Fisher Outfit, can be bought for

Bjarki is a Icelandic boy wearing a gray sweater, brown pants, pink boots, purple-blue scarf and a red cap. He has a sheep in his hands. He appears to be a red-head.

In his first outfit, Power Outfit, he is wearing green sneakers, red shorts, blue training shirt and a brown belt. He has black gloves on his hands and still has a sheep in his hands.

In his second outfit, Fisher Outfit, he is wearing green-black sneakers, brown pants, green sweater, yellow jacket, and a gray cap. He has a fishing pole in his hand.

Bjarki Welcomes The Player to 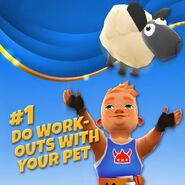 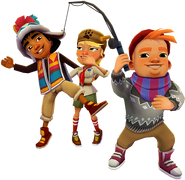 Bjarki with Carlos in his Poncho Outfit and Olivia