Amira is a character released in

95,000, just like any other limited character. Her first outfit, the Genie Outfit, can be purchased for

15. Her second outfit, the Jewel Outfit, can be purchased for

Amira has the appearance of an Arabian girl. She has straight brown hair, fashioned uniquely in a side ponytail with bangs, adorned with a wide yellow headband. Her eyes are brown and her skin is moderately tanned. Amira's outfit includes a yellow tank top with green-blue stripes that shows her belly button and purple pants with a belt matching her top. She wears multiple gold accessories, which include a pair of wide wristbands/bracelets, a snake-shaped upper arm bracelet, a small hoop earring which is connected with a golden chain to a similar nose ring. Probably the most noticeable trait about her is that she is barefoot.

In her Genie Outfit, she has blue skin and black hair which sticks up much like the Genie from the Disney film Aladdin. She now has a white cloth-like material around her head. She wears a purple shirt and the same long purple pants. She has blue and red shoes with the end of He shoe curving. Finally, she has a white material that has bumps all across the material. She still has the chain that came out of her nose and around her right earring.

In her Jewel Outfit, she wears a striped blue and flesh coloured dress, white tights, purple boots, gold bangles, a purple headscarf and a gold ring on her head with a big red jewel in the centre. She gets back her nose piercing with a chain connecting it to her earring. 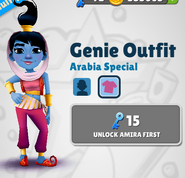 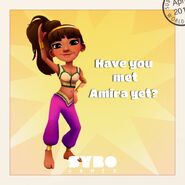 Have you met Amira? 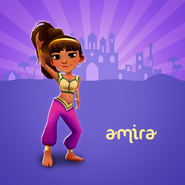 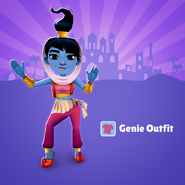 Getting a Top Run with Amira

Getting a Top Run with Amira in her Genie Outfit

Amira, Tricky and Prince K On a Magic Carpet 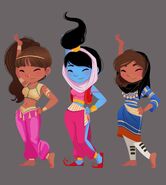 Unlocking the Speed Up upgrade of Color Cloud with Amira
Add a photo to this gallery
Retrieved from "https://subwaysurf.fandom.com/wiki/Amira?oldid=169836"
Community content is available under CC-BY-SA unless otherwise noted.