Alexandre is a limited surfer from

Alexandré is a street artist with fair skin and hazel eyes. He has messy blonde hair and wears a turquoise cap with gold features. He has a turquoise, aqua and gold colored jacket and underneath he wears a white t-shirt. He wears light brown shorts with gray spots. It has a light blue belt where it has some spray cans. On the left leg he wears a long black stocking while the right one wears a short stocking of the same color. He has white shoes with black laces and a green tongue. He wears gray and yellow headphones and has a band-aid on his left cheek. 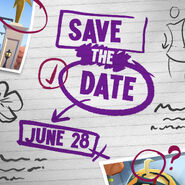 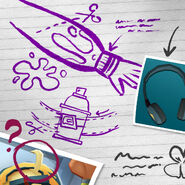 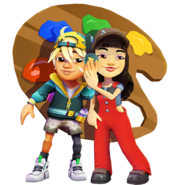 Alexandre and Parkour Rin with the Paint Palette board
Español Français Português do Brasil Türkçe
Community content is available under CC-BY-SA unless otherwise noted.
Advertisement