" She was so much fun to design and bring to life. I was inspired by the space age, Barbarella, etc." - Hana Noelle ( Concept, model and texture from scratch designer for Alba) descripting the inspiration for Alba.

Alba is a limited character released on

. She can be purchased with

95,000. Both her Cowgirl Outfit and Space Outfit can be bought for

In her Cowgirl Outfit, she is a brown, long haired girl with light brown skin and a cowboy hat. She wears blue earrings with brown/turquoise boots. She wears tan shorts with a brown, silver and turquoise belt. She wears a shirt with some sort of red pattern. She also wears blue bracelet on her right wrist, while a white and turquoise bracelet is on her left wrist. However, she isn't wearing pink lipstick.

In her Space Outfit, She now wears an orange astronaut suit, a blue belt with a star, blue-cream boots with stars. 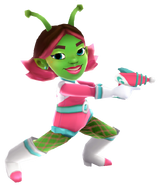 Alba with Jake and Tricky 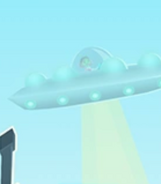 Alba in the flying saucer at the top of the

Alba in her Cowgirl Outfit surfing on Starcruiser

Unlocking the Color Splash upgrade of the Color Cloud with Alba 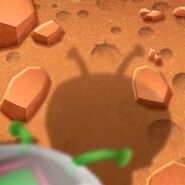 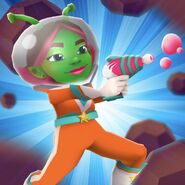 Alba in her Space Outfit with her blaster 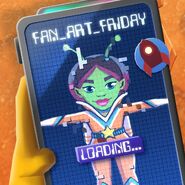 2D version of Alba in her Space Outfit 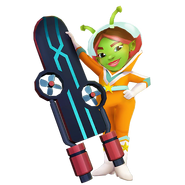