Aina is a limited character, exclusive to

. She can be unlocked by purchasing with

95,000, just like all other limited characters. Her 1st outfit, the Daisy Outfit, can be bought for

30. Her secondd outfit, the Blue outfit, initially could be bought for

Aina wears a yellow hoodie with green lines and purple T-Shirt under it, blue shorts and green sneakers. She has black bun, a flower on her head, a green Baseball cap and a piercing in her nose

In her Daisy Outfit, she has daisies painted on her face, she wears gold bracelets on her arms and around her ankles and has sandals. She has a burgandy shirt and a lavander skirt.

In her Blue Outfit, she wears a white-blueish straight dress with a print or design of something like a fish, she has a blue belt fastened to her dress and around her ankles has matching blue sandals. She wears blue bracelets and one earring. She also wears a hair net. 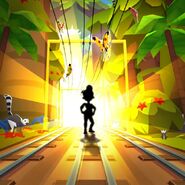 Getting a Top Run with Aina 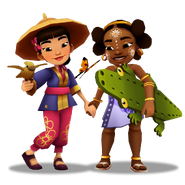 Aina with Liu and Croc 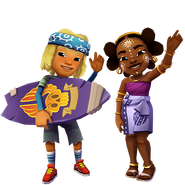 Aina next to Dylan holding Renegade

Aina in her Daisy Outfit surfing on Teddy

Aina looking at a butterfly 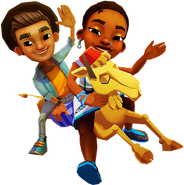 Aina, Taha and the Camel Board.

Aina along with other surfers
Español Français Português do Brasil Türkçe
Community content is available under CC-BY-SA unless otherwise noted.
Advertisement