Ace is a special character released on Dubai update. He is part of a bundle with Diablo for real money

Ace wears a dark blue shirt under a gold Jacket with black spades on the sleeves, purple pants with a gold spade on the right and black shoes with gold fronts.

In Pilot Outfit, he wears a plain airplane pilot outfit in light blue and matte dark colors, with sunglasses. 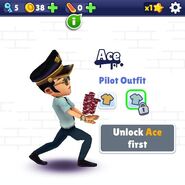